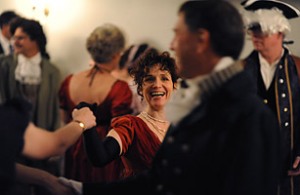 Devoted to the works of Jane Austen, fans of the 19th century English romance novelist fittingly call themselves Janeites. A movement dating back to the late 1890s, Janeitism was, strangely, a shared enthusiasm among men for Austen’s body of work. (A short story featuring a group of World War I–era soldiers who form a secret Janeite society was published in author Rudyard Kipling’s Debits and Credits in 1926.) However, the embodiment of modern Janeitism belongs to groups of fans whose loyalty has blossomed from literary fandom into practicing admiration. Now, Janeites are known not only for their passion for Austen’s books, but for their enthusiasm for (and attempted visitation of) her world. Fans regularly stage dramatic readings, throw lavish period-style costume balls and embark on Jane Austen–inspired pilgrimages to places described in her novels or frequented by the author during her lifetime.