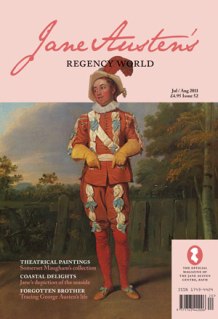 In the new issue:
JANE AUSTEN FESTIVAL IN BATH A preview of the exciting programme lined up for September
THEATRICAL PAINTINGS The amazing set of costumed portraits collected by Somerset Maugham is now in safe hands
COAST DELIGHTS How Jane Austen depicts the seaside in her novels
FORGOTTEN BROTHER Maggie Lane traces the life of George Austen, Jane’s little-known brother
LUNAR RIOTS The day a Georgian society in Birmingham was attacked by a mob
WHEN WE ARE GONE How did Cassandra handle Jane’s legacy, and what about ours?
JANE’S MEN Our favourite author was not only an expert on women, she had a strong insight into the minds of men
Plus: All the latest news from the world of Jane Austen, as well as letters, book reviews, quiz, competition and news from JAS and JASNA.
Jane Austen’s Regency World will be at the following events, and look forward to meeting many subscribers, old and new:
July 9 &10 Jane Austen Festival, Louisville, Kentucky, USA
Sept 17 Jane Austen Festival, Bath, UK (country fayre)
Oct 13-15 JASNA AGM, Fort Worth, Texas, USA